Experience the humbling beauty of the plains on the Niwot Trails. Affording a spectacular mountain view, follow historical irrigation routes through this cottonwood-lined path. 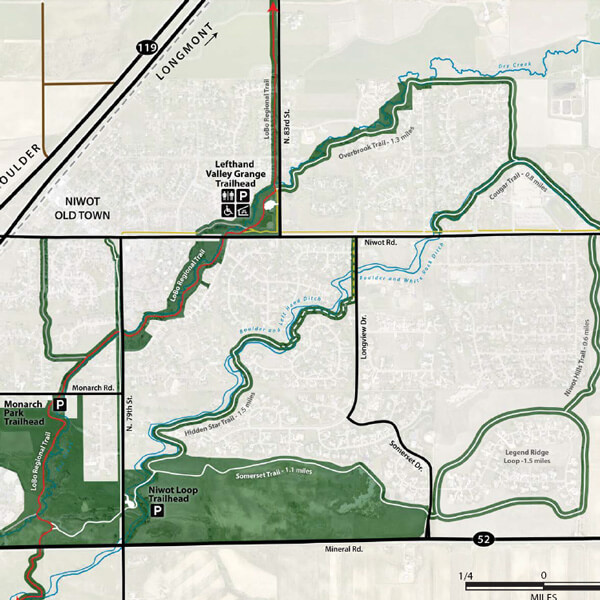 Eighty million years ago this entire area was covered with a great inland sea, the Western Interior Seaway, and evidence of this ancient sea is abundant along parts of the Niwot Trails. The sandstone formations found here were deposited in this sea and trace fossils are still here showing where marine organisms made their burrows.

Chief Niwot (c. 1825-1864) was a tribal leader of the Southern Arapaho people and played an important part in the history of Colorado. Chief Niwot and his people lived along the Front Range often wintering in Boulder Valley, site of the future city of Boulder.

These trails follow along historic ditch routes and wind through neighborhoods of Niwot, allowing access for many residents to wild areas just steps away from home.

In April 2003, the Board of County Commissioners approved a list of 10 prioritized regional trail projects. The Longmont-Boulder Trail was among the top, consisting partly of the Niwot Loop Trail.