The primarily soft-surface LoBo Regional Trail was identified in the 2003 Regional Trails planning process as preferable to a hard surface connection originally planned to be directly adjacent to the Diagonal Highway. Instead, some spot improvements to the shoulders along the Diagonal Highway were identified for a hard-surface connection for bicyclists with the LoBo Trail serving as a meandering connection for both recreational and commuting use.

Additional trail information is located through the Parks and Open Space Department. 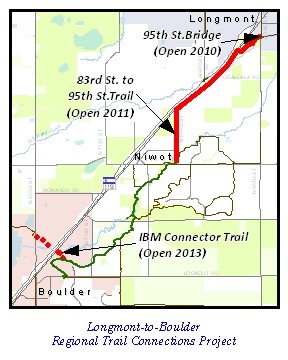