High temperatures and low moisture have increased the fire danger

The fire restrictions are being implemented due to increasing fire danger, lack of moisture, and the forecast for hot temperatures. Competent evidence, including quantitative data produced by the National Fire Danger Rating System (NFDRS) and the National Weather Service, which is also used by our partners with the United States Forest Service, exists, which necessitates implementing Stage 1 Fire Restrictions.

The fire restrictions include any and all unincorporated areas of the county:

A map depicting the areas of Boulder County affected by the fire ban is included below.

Anyone found in violation of the fire ban may be convicted of a class two petty offense and may be subject to a $500 fine, in addition to any possible civil penalties. Higher fines may be imposed for subsequent offenses.

Colorado state statutes authorize counties to impose fire restrictions, "to a degree and in a manner that the Board of County Commissioners deems necessary to reduce the danger of wildfires within those portions of the unincorporated areas of the county where the danger of forest or grass fires is found to be high based on competent evidence." 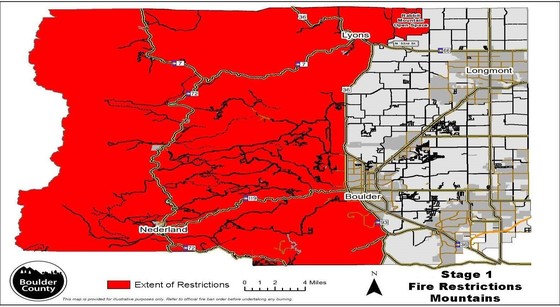