At a public hearing on Nov. 15, the commissioners approved two new shooting closures and an expansion of an existing closure in unincorporated western Boulder County

Boulder County, Colo. -- Citing significant safety concerns for community members in three forested residential areas of western unincorporated Boulder County, the Board of County Commissioners voted at a public hearing on Nov.15 to initiate no-firearm discharge area shooting closures in the Magnolia and Raymond/Riverside communities and to expand an existing closure in the Sugarloaf community that the Board previously designated in Boulder County Resolution No. 80-52.

The commissioners made exceptions for lawful and licensed hunting in the Magnolia and Raymond/Riverside communities while prohibiting all firearms discharges in the expanded Sugarloaf area.

"The communities of Magnolia, Sugarloaf, and Raymond/Riverside have made clear through emails, written comments, and verbal testimony that creating closure areas for shooting is a public safety issue,” said Commissioner Marta Loachamin. “It’s about taking care of residents who have come to us and asked us to use the county’s statutory powers to protect residents and their children, as well as our trails and the environment. And we have an obligation to listen to residents who know their communities and what’s happening there.”

“All three community areas that we considered today have been asking for a public safety solution from the County Commissioners for more than a decade,” said Commissioner Claire Levy. “The communities deserved to be heard and they’ve brought us some very serious concerns not just for safety but for environmental damage and noise impacts as well. Our actions will not provide complete relief, and we aren’t able to provide comprehensive enforcement, but we believe it's long past time to do what we can for these communities."

“The situation in the mountains is very bad and someone is going to be wounded or killed, and have additional wildfire starts. ” said Commissioner Matt Jones. “We’ve used the powers available to us to address these critical safety concerns while we work with our partners on a more complete solution, which removes sport shooting from all US Forest Service public areas of Boulder County.”

County staff presented maps and boundary recommendations (see images below) of potential closure areas to the Board of County Commissioners (Board) at the public hearing. These presentations included an overview from the County Attorney’s Office detailing the statutory authority for the Board to designate each area where the discharge of firearms is prohibited. Also presenting were representatives from Boulder County Community Planning and Permitting, the Boulder County Sheriff’s Office, Colorado Parks & Wildlife, and the U.S. Forest Service. (View full staff/Board hearing packet)

Members of the impacted communities and the public were invited to attend and comment in person, online, or by phone. The majority of written comments received in advance of the hearing--along with testimony presented in-person--were in favor of the shooting closures, particularly for recreational sport shooting in populated residential forested areas.

Following the Board’s action, county staff will prepare resolutions that detail the Board’s decision and that set forth an effective date for the closures, and the Board will sign the resolutions at a future business meeting.

The discharge of firearms in close proximity to, and within western Boulder County communities, has been a long-standing concern. A firearm is any pistol, revolver, rifle, or other weapon of any description from which any shot, projectile, or bullet may be discharged. A projectile also includes any arrows, shot from a bow of any type.

Public safety risks, including the potential for injury or death resulting from negligent firearms discharge and increased fire danger, top the list of possible harms. Other factors that play into the establishment of no-discharge areas include environmental impacts, such as those related to clean water; responsible stewardship of wildlife resources; and the ability of law enforcement to respond to shooting-related offenses. Limited law enforcement resources and related issues, such as the ability to mount a timely response and the sometimes-difficult nature of determining whether a offense occurred in a closure area, are some the challenges when it comes to successful policing of these infractions.

Part 3 of Article 15 of Title 30 of the Colorado Revised Statutes authorizes the Board of County Commissioners to designate areas in unincorporated Boulder County within which it is unlawful for any person to discharge any firearm, except a duly authorized law enforcement officer acting in the line of duty, a person discharging a firearm in a shooting gallery, or a person discharging a projectile from a firearm on private property in a safe manner. To designate an area where the discharge of firearms is prohibited, state law requires that the proposed area have an average population density of not less than one hundred persons per square mile.

County staff conducted density analyses for the proposed areas and determined that this requirement was met in each case.

Previous Boards of County Commissioners have considered designating additional closure areas similar to the one currently existing in the Sugarloaf community, and last year the current Board held a public meeting regarding a proposed expansion of the Sugarloaf closure.

Resolutions Prohibiting the Discharge of Firearms in Unincorporated Areas

Based on written and in-person public testimony and a review of the proposed staff maps and boundaries, the Board of County Commissioners approved three separate resolutions for the proposed closures.

For the Sugarloaf community, the County Commissioners affirmed that the boundaries proposed on map B1 in the meeting materials exceeded the density requirement of 100 persons per square mile and designated the proposed area as one in which the discharge of all firearms is prohibited to the extent allowed by law.

For the communities of Raymond/Riverside and Magnolia, the County Commissioners affirmed that the boundaries proposed on maps C1 and D1 in the meeting materials exceeded the density requirement of 100 persons per square mile and designated the proposed areas as ones in which the discharge of all firearms is prohibited with the exception of hunting, pursuant to state laws and in compliance with all Colorado Parks & Wildlife regulations, including the possession of a valid hunting license.

In addition to exploring individual closures around specific communities, the Boulder County Commissioners are working with such organizations as the Northern Front Range Recreational Sport Shooting Management Partnership to develop solutions for recreational sport shooting. These include working towards construction of a suitable public shooting range that would lead to a shooting closure of 80,000 acres of public land in Western Boulder County. 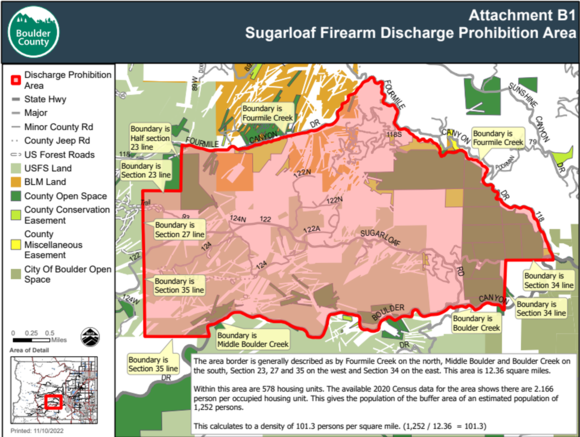 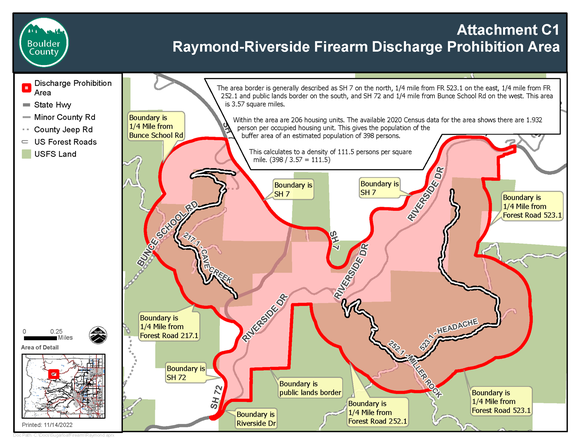 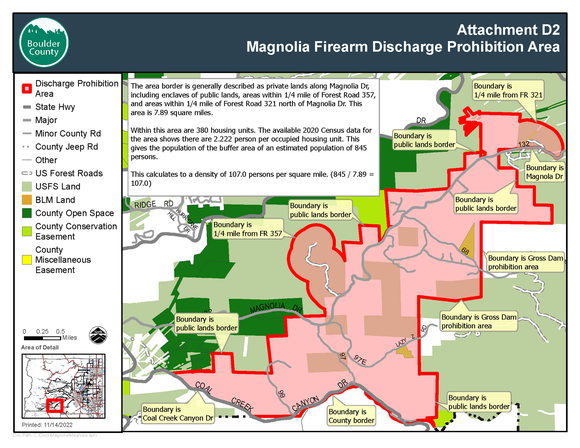 The Board report for the Nov. 15 public hearing and a recording of the hearing are available on the county’s escribe website. For questions about the public hearing, please contact Barb Halpin by email or at 720-564-2830.