After months of negotiations that began in November, Boulder County joined other local governments, environmental groups, and industry to put forward a consensus proposal that became the foundation for the AQCC rule.

"Last year's terrifying wildfires were yet another reminder that climate change is here and local communities across Colorado are suffering the consequences. This collaboration between local governments, environmental groups, and industry will mean less carbon pollution and cleaner, safer air. It is a win for Coloradans all over the state." Erica Sparhawk, Town of Carbondale Trustee and President of Colorado Communities for Climate Action, a coalition of 36 local governments across the state.

Pneumatic controllers – devices that open and close valves to regulate temperature and pressure at production facilities and well sites – are the second largest source of methane emissions from oil and gas operations in Colorado.

"After a year of explosive wildfires and dangerous air quality, it is clear that Colorado communities are already paying the costs of the climate crisis. Millions of Front Range residents – especially those in historically marginalized and disproportionately impacted communities – have been suffering from exposure to ozone pollution due to these sources. While there is still much more work to be done to tackle the ozone problem, this new rule will mean improved conditions for Coloradans all over the state,” said Jeff Zayach, Executive Director, Boulder County Public Health. 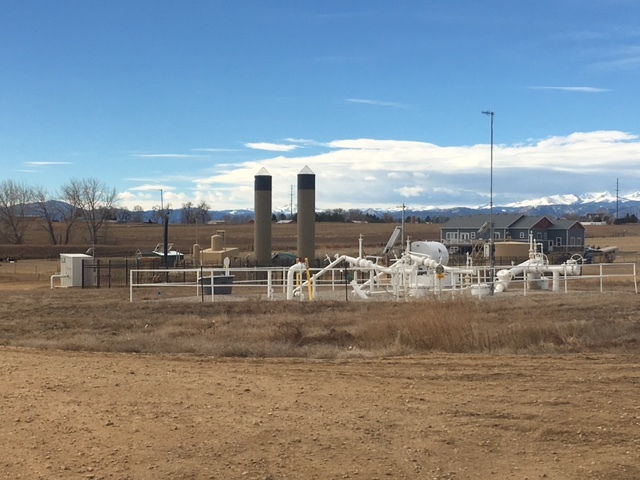 Small oil and gas operation near the county line between Boulder and Weld Counties.

Pneumatic controllers, which are used by operators throughout the state, rely on pressurized natural gas to activate valves at oil and gas facilities. Traditionally, these devices have been designed to emit methane and other pollution each time they actuate. However, newer, non-emitting devices are widely available today and represent a real opportunity to reduce pollution at well sites across the state.

“Colorado is once again leading the nation in addressing methane emissions from the oil and gas industry,” said Dan Grossman, Rocky Mountain Regional Director for Environmental Defense Fund. “With broad support from industry and the environmental and public health community, the Commission is setting the standard for other states and the U.S. EPA to follow in addressing pollution from new and existing sites using pneumatic devices.”

According to a 2017 Environmental Defense Fund analysis, pneumatic controllers released more than 132,000 metric tons of methane, or about the same amount of climate pollution as nearly 1.9 million passenger cars. Methane is a powerful greenhouse gas that is over 80 times more potent than carbon dioxide at trapping heat within the Earth’s atmosphere over a 20-year timeframe.

"With the impacts of climate change hitting closer to home than ever before, we're so excited to see Colorado once again set national leadership with precedent-setting, commonsense rules that reduce methane pollution in our communities,” said Sara Rose Tannenbaum, Climate Advocate, Conservation Colorado

Grassroots and community groups hailed the rule as a win, welcoming emission cuts from one of the largest oil and gas emission sources. In a 2019 study, the Colorado Department of Public Health and Environment found those living closest to oil and gas development are most at-risk to negative health effects from air toxics such as benzene (a known carcinogen) and toluene.

Rodger Steen, the chairman of Western Colorado Alliance’s oil and gas committee, noted, “We are pleased that this new rule was developed in collaboration with industry, which is the ideal way to develop new rules for all emitters of air pollution. Requiring use only of these non-emitting controllers by the oil and gas industry represents an initial step in a series of steps needed to minimize climate change.”

The AQCC’s rule for pneumatic controllers would do the following:

The new rules come at a time when state officials need to implement strong climate policies. For Colorado to achieve the greenhouse gas emission targets outlined in HB19-1261, the state will need to take even bolder action to ensure that reductions both in the oil and gas sector and economy-wide reach the ambition of the statutory mandates. Under Colorado’s Greenhouse Gas Roadmap, the oil and gas sector needs to reduce emissions by 60% by 2030, which is no small feat and will require more aggressive near-term action for the sector that is so critical to combat climate change.

Mission of the Office of Sustainability, Climate Action & Resilience

To ensure Boulder County’s operations and decision-making reflect our commitment to Environmental, Social and Economic sustainability and to build partnerships to help make the broader community more sustainable.