Bicycle Level of Traffic Stress (BLTS) is a planning tool that is used in combination with other factors such as public input and crash data to identify needed improvements and gaps. The applied methodology was modified from existing methodologies created by the Colorado Department of Transportation (CDOT) and the Oregon Department of Transportation (ODOT). These methodologies were utilized based on the more rural, nature of county roads. For this reason, the low-stress definitions/facility types defined by the National Association of City Transportation Officials (NACTO) are slightly different and more urban-oriented. By looking at elements such as shoulder width and traffic speeds, the BLTS identifies the areas where bicyclists are likely to feel more or less safe in relation to vehicle traffic. The goal is to make the network more accessible to more people by lowering the level of traffic stress.

Facilities are ranked on a scale of 1 to 4, with 1 being the lowest stress and 4 being the highest stress:

Data points used for this analysis include:

The table to below was used to score the level of traffic stress for Boulder County roads. 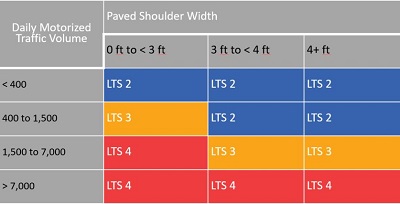 View a Bicycle Level of Stress Map of county roads.