The Fairgrounds Master Plan will guide the evolution of the facility into a far-reaching community events complex by identifying meaningful ways to continue to serve the community, exploring future upgrades to the facilities, and maintaining a focus on the rural heritage and agricultural focus of Boulder County.

The preferred site plan has been developed through refinement of three conceptual options (see below) that were presented to the community for feedback. Minor modifications will be made including the addition of a detention pond near Cattail Pond. 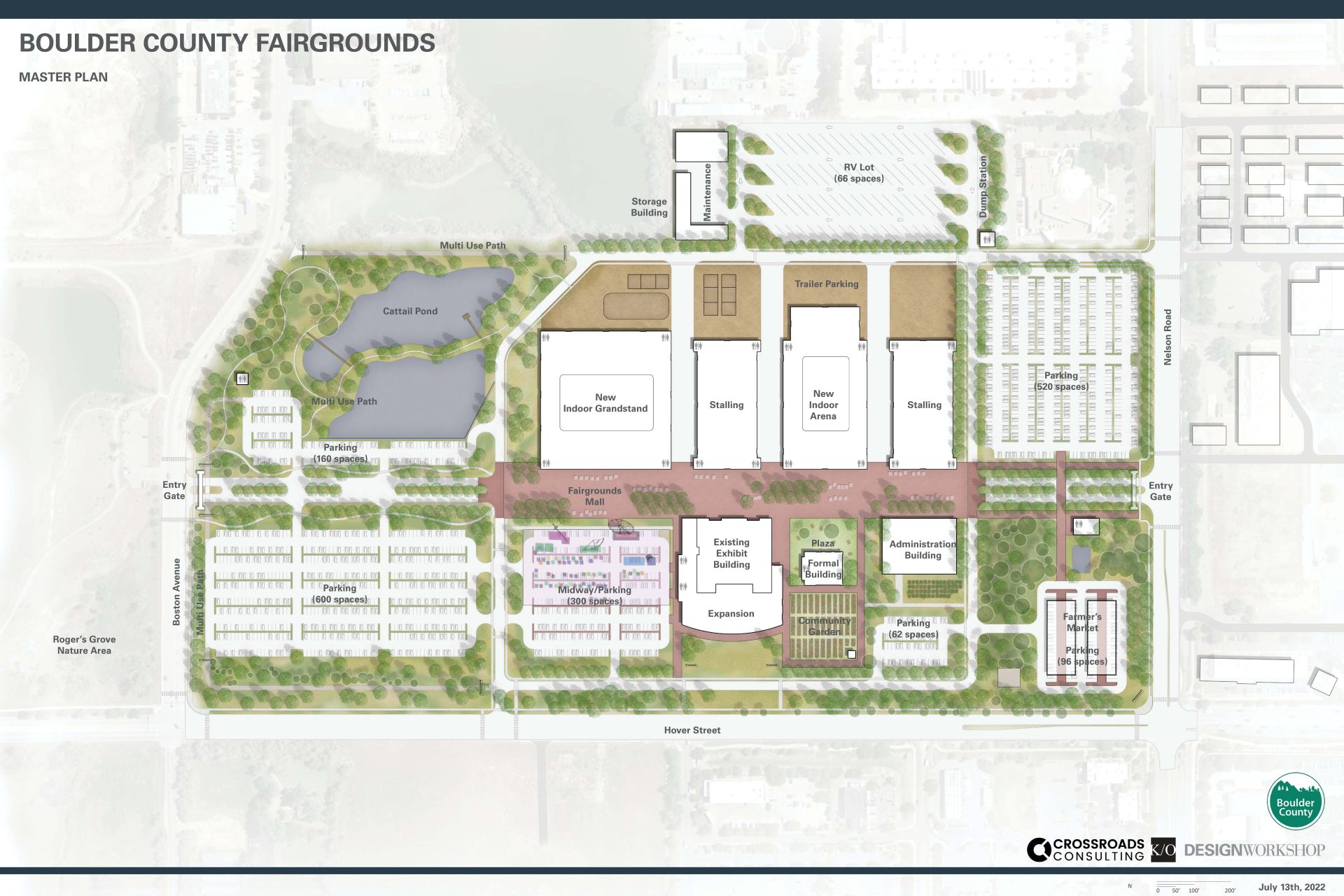 The deadline to submit comments on the Fairgrounds Master Plan is Friday, July 22.

The Boulder County Fairgrounds is a unique county amenity that provides an integral service to the community. The Fairgrounds, with its facilities and grounds, has not had any significant updates since 1978 when Boulder County completed its last Fairgrounds Master Plan. Although some minor additions, remodels, and groundwork have been done over the years to make the buildings and grounds more functional, these were minor adjustments to the original Master Plan.

The current Fairgrounds site was established in 1978 and presently operates on close to 80 acres. The Fairgrounds has evolved into a multi-purpose facility that supports over a thousand events a year in addition to the annual fair. A new master plan will guide the evolution of the facility by identifying meaningful ways to continue to serve the community, exploring future upgrades to the facilities, and maintaining a focus on the rural heritage and agricultural focus of Boulder County.

The Fairgrounds Master Plan will be the roadmap for how we can redevelop the site. The overarching goal of this plan is to continue the legacy of the Fairgrounds as a cherished amenity for everyone in Boulder County.

Integral to this process is a two-pronged approach that considers the future needs of the aging building facilities as well as the potential of the grounds to serve as a well-used year-round park space. Boulder County sees the updated Fairgrounds Master Plan as an opportunity for the community and current users to tell us what they want to see. We are asking: What is working well at the Fairgrounds and what should be changed?

Based on a market analysis study, user input, and a comparison of comparable facilities, some of the big opportunities that exist to improve the fairgrounds include the following:

The following concepts look at the locations of these improvements on the site. 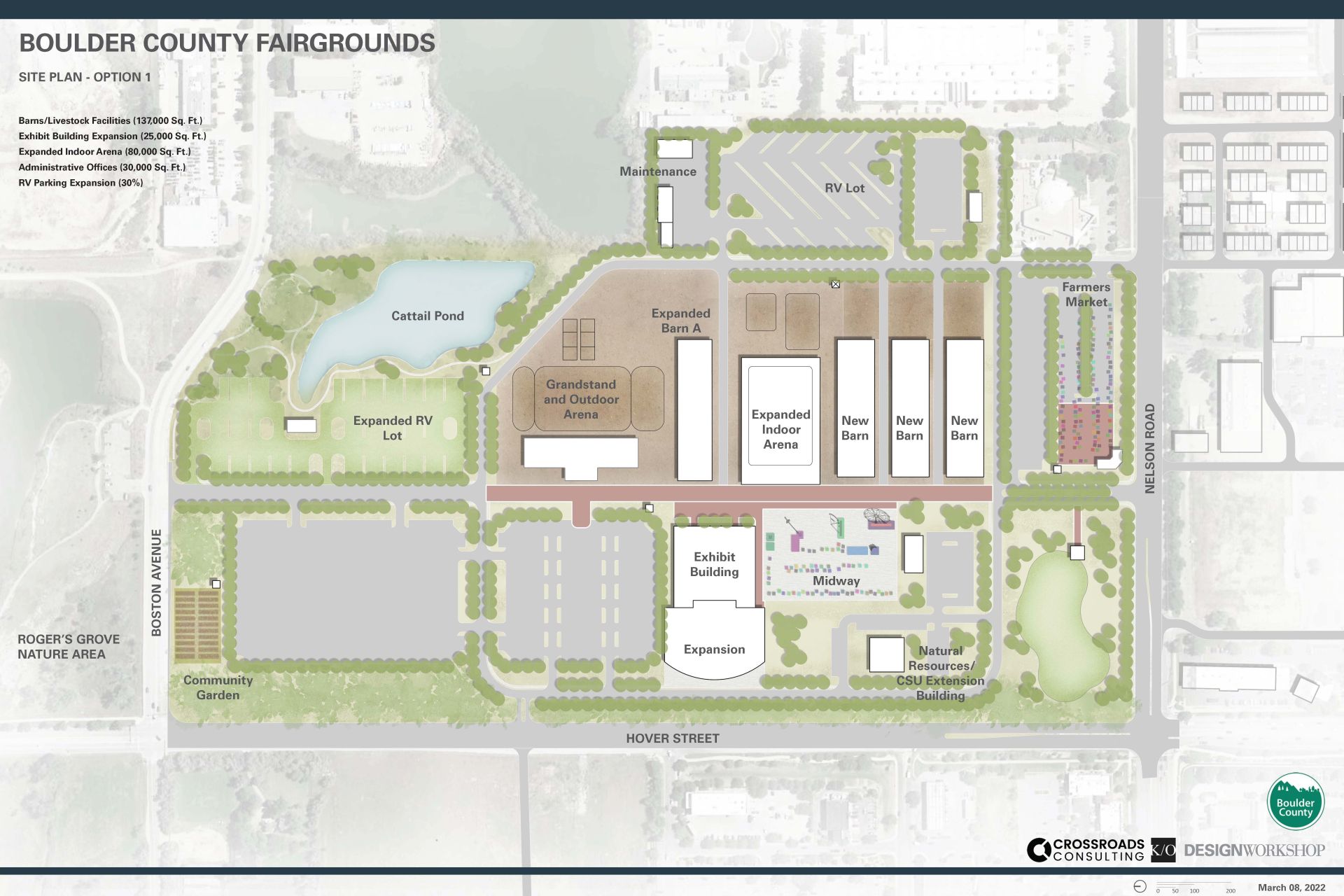 Concept 1 builds upon the existing layout and maintains the most structures in place. 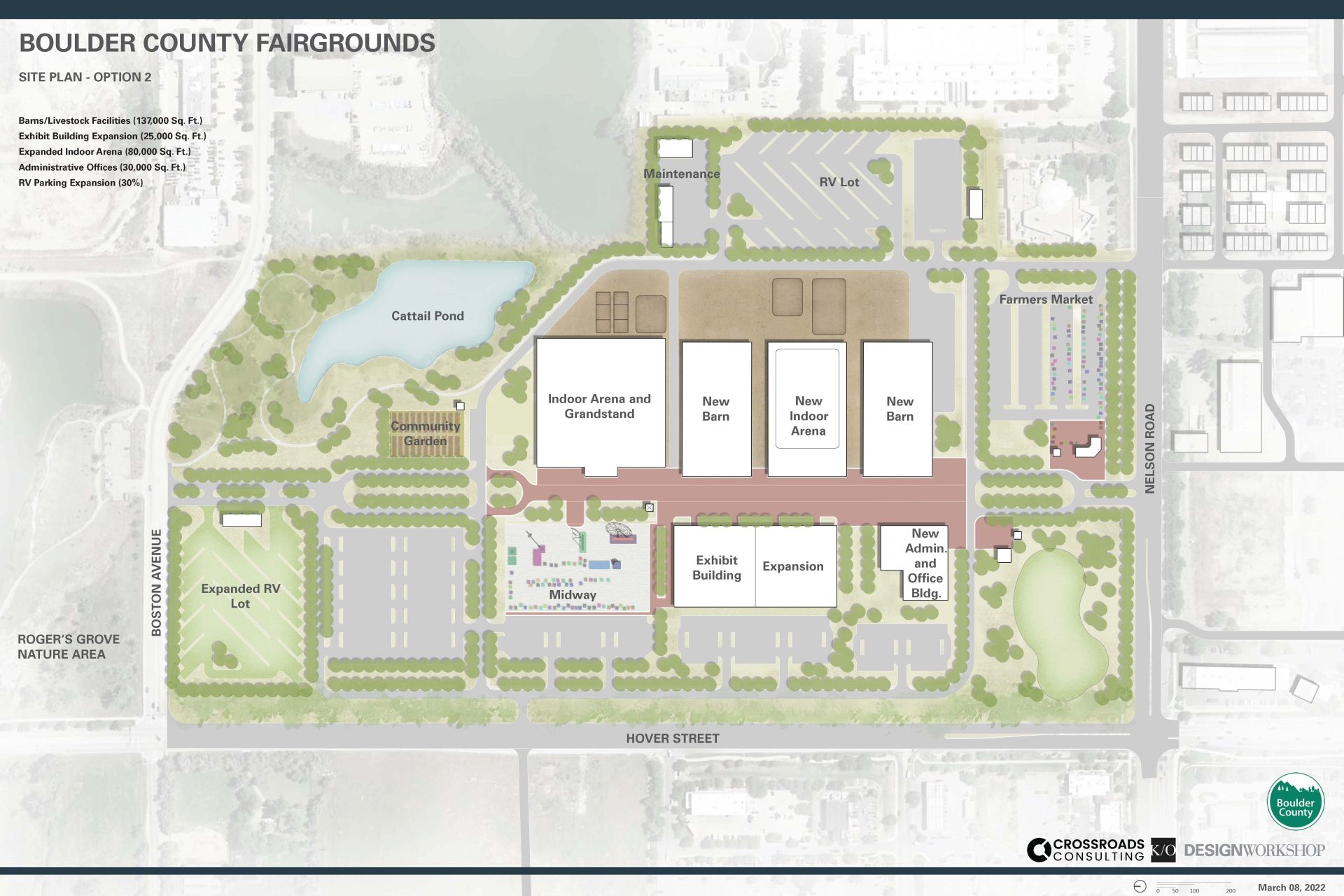 Concept 2 introduces more idealized and modern facility footprints. It is organized on a central, formalized axis to draw people through the site, from Nelson Road on the south to the open space across Boston Ave. to the north. 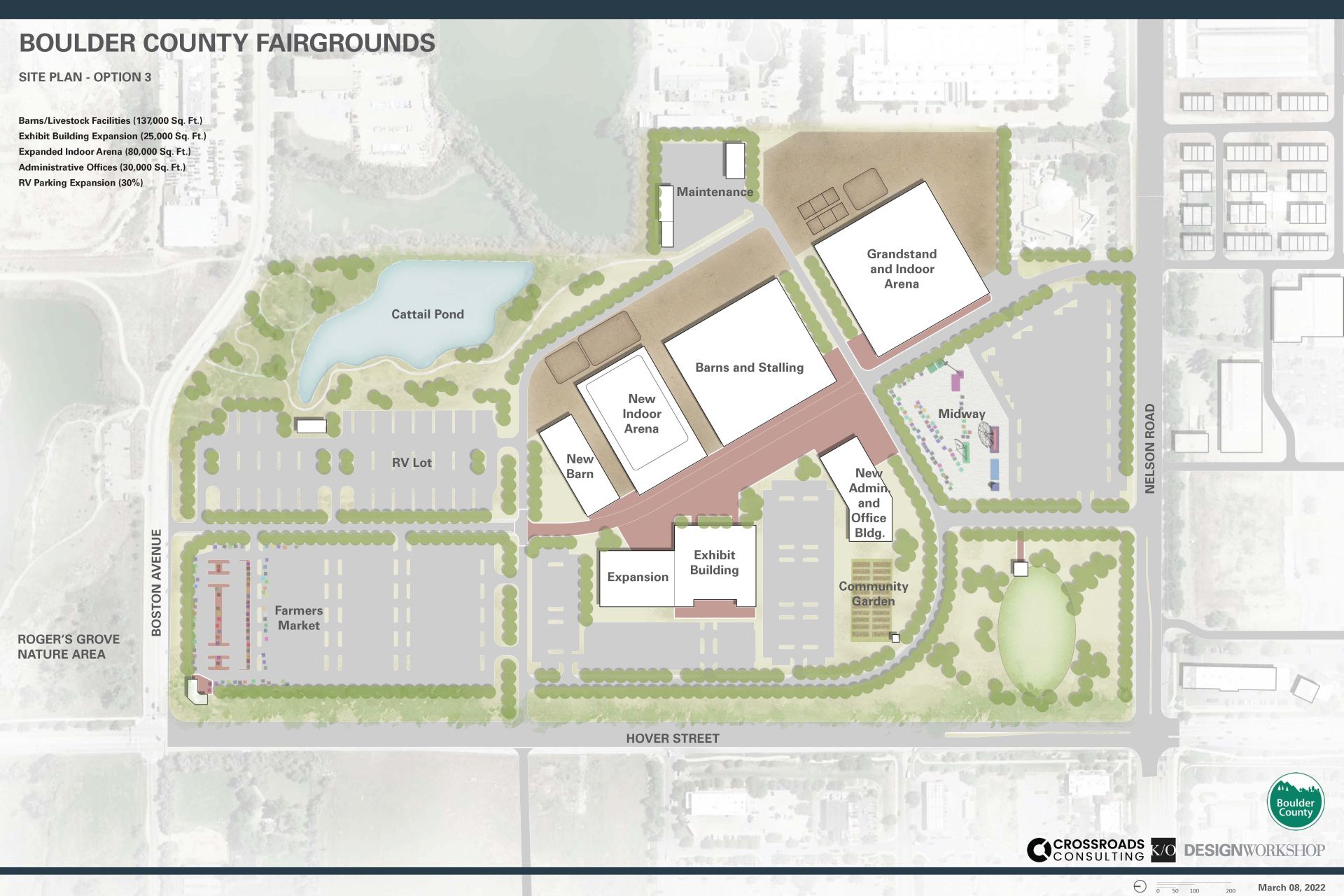 Concept 3 is the most long-term and visionary concept. It reimagines the entire site, building in flexibility of use in the future and aligning site access points with future adjacent developments.

Staff presented the preferred site plan and collected feedback at the final public meeting on July 13.

An online meeting was held on March 8 to present three conceptual options that will help guide the future of the Fairgrounds.

An open house was held on Nov. 16, 2021, and provided opportunities for one-on-one discussion with Design Workshop and Boulder County staff.

Boulder County hired the architectural group, Design Workshop, who specializes in fairgrounds master plans and has a track record of community engagement. The success of their projects has come from the process of listening to the community first, then presenting ideas from what they heard before finalizing any plans. Boulder County is also committed to this design process and sees this as the best way to create a safe, accessible, dynamic space for everyone.

The project team conducted a Site Analysis, Facility Assessment, and a Use Analysis and Operational Review. 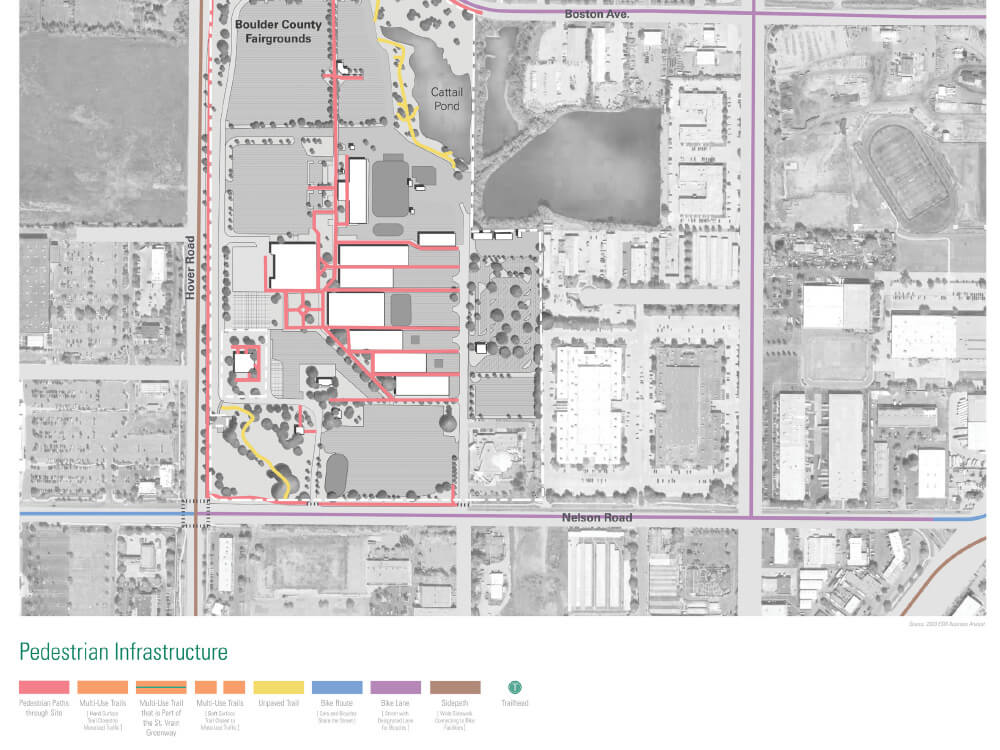 A site analysis, in the form of digital mapping, gathers available information to pull together an initial understanding of various factors of the site that will influence future planning and design. It begins to identify opportunity areas and areas where constraints are present. This analysis includes vegetative and impervious cover, pedestrian and vehicular circulation, solar analysis, zoning and regional context, and soil and hydrological analyses. 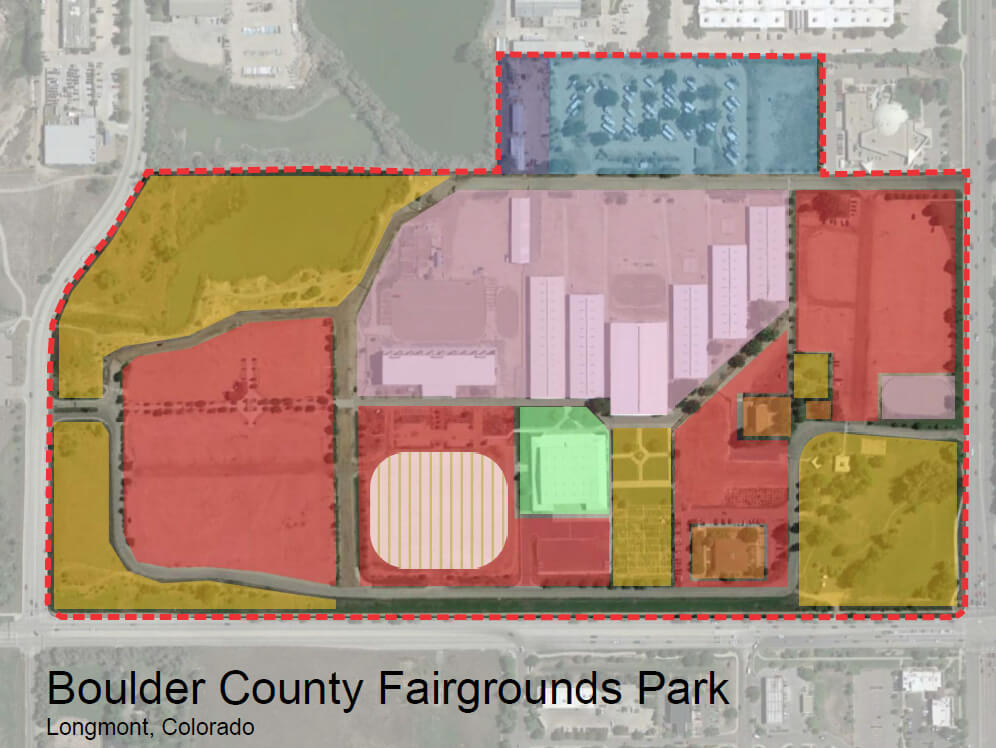 The Facility Assessment reviews each building on the site to evaluate the existing conditions and potential for improvement. These include exterior facades; vertical circulation; user amenities; mechanical, electrical, and plumbing systems; loading docks and access; exhibition, meeting, and banquet facilities; roofs; lighting, sound, audio/visual, and IT systems; and parking and ADA. 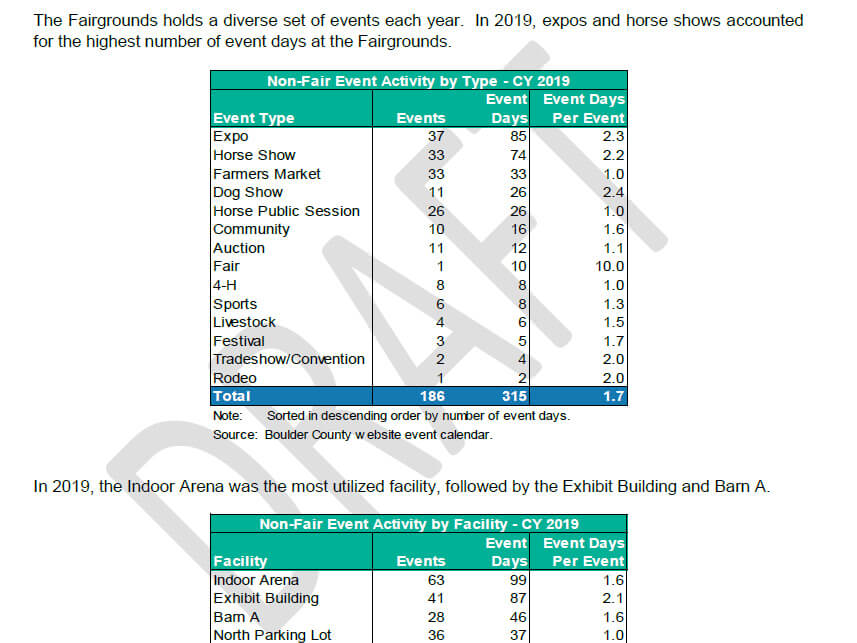 History of the Fairgrounds

The Fairgrounds is the home of the Boulder County Fair, the oldest fair in the State of Colorado since 1874, and the Longmont Farmers Market. Over the years the Fairgrounds has continued to evolve from solely supporting a fair to a multi-use events center hosting multiple activities for non-profits, commercial activity, and a center to support a myriad of emergency operations.

Due to its increased popularity and attendance, pressures on the Roosevelt Park facilities and its surrounding community required the Fairgrounds to relocate. Committees were formed in 1971 to formalize a survey of public attitudes and make recommendations concerning the feasibility of establishing a permanent facility at another location. Based on this recommendation, the Boulder County Commissioners appointed the Boulder County Fairgrounds committee in 1975 and charged it to evaluate alternative sites for acquisition. As a result of this evaluation process, the committee, Boulder County staff, and City of Longmont staff recommended a 130-acre site generally bounded by the St. Vrain Creek, Hover Road, and Nelson Road. Following acquisition of the site in 1976, master planning for the complex was initiated.

In 1978, the Fairgrounds moved from Roosevelt Park located in the center of the City of Longmont to its current location at 9595 Nelson Road in Longmont. Later, a new road, Boston Avenue, split off Fairgrounds Lake from the Fairgrounds proper, and eventually Fairgrounds Lake was transferred from the county to the City of Longmont. The Fairgrounds is now 83 acres and is bounded by Nelson Road, Hover Road (95th) and Boston Avenue. Included on the 83 acres is a 96-site campground with shower and restroom facility and the Longmont Humane Society. The campground is operated and maintained by Boulder County, but the Humane Society is operated privately.

Over the last 41 years the Fairgrounds has evolved into a multi-purpose facility supporting over 1,037 events in 2018 to include the 10-day Boulder County Fair. The Fairgrounds also serves as an evacuation center for a myriad of disasters during which Fairgrounds staff operate the Fairgrounds 24 hours 7 days a week until the event is over.

Asset to the Community