Cindy Braddock was appointed Boulder County Assessor in January 2017 to fill the seat left vacant by the retirement of Jerry Roberts. She was elected as Assessor in 2018, and her current term continues through early January 2023.

Cindy is a Colorado native, grew up in Boulder and graduated from Fairview High School in 1975. She received a Bachelor of Arts degree in Geography in 1980 from the University of Minnesota.

Cindy was hired by the Boulder County Assessor’s Office in January of 1995 and since then has held various roles with increasing responsibilities, most recently serving as Chief Deputy Assessor. Her work experience firmly rooted her understanding of the property assessment process. Using her broad background and understanding of technology, office management and mass appraisal Cindy has served the citizens of Boulder County, participating in providing excellent public service the Assessor’s office provides.

Cindy and her husband Nathan Braddock live in Louisville. They have a blended family of six grown children and 4 grandchildren. As a longtime resident of Boulder County and the City of Louisville, Cindy enjoys all that the area has to offer. 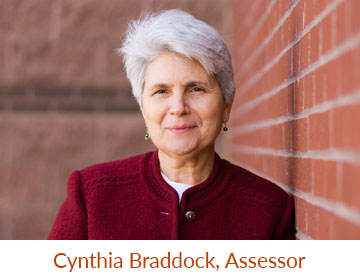