The Public Works Department will reconstruct North 95th Street between Valmont and Lookout roads. The project will also include improvements to 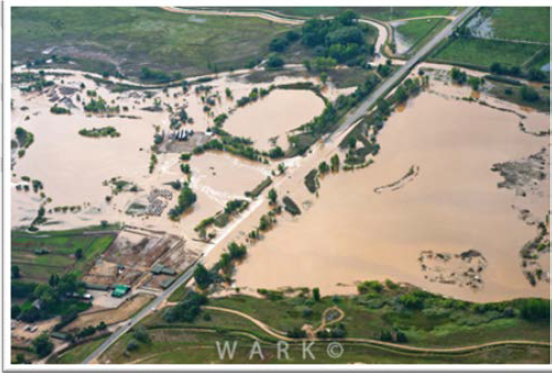 protect both the road and surrounding open space properties from damage during flood events. This is the final segment of a multi-year effort to reconstruct North 95th Street between Lafayette and Longmont.

Flooding of Boulder Creek in 2013 and 2015 overtopped 95th Street north of Boulder Creek. Both storm events caused significant damage to the roadway, exposed critical utility infrastructure, and left the City of Boulder’s Boulder Valley Farm strewn with debris. The 2013 event closed 95th Street in this stretch for more than three-weeks as the road remained underwater and subsequent repairs could not be completed for many days.

Several approaches to prevent Boulder Creek from overtopping the road during large flood events were considered; however, the size and cost of building a structure that would span a 100-year flood at this location was found to be cost prohibitive. The project’s main goal is to keep the road from overtopping during smaller events, such as 5- and 10-year storms, and most importantly ensure that the road remains intact during and after larger 100-year events, even if the road needs to be closed until water recedes.

The current designs call for the installation of six large reinforced concrete box culverts directly north of the existing bridge over Boulder Creek. These structures will carry excess flood water during the 5- and 10-year storms. The boxes will remain dry at most other times and are designed to provide safe passage under the road for wildlife traveling along the creek corridor. Small, natural-bottomed floodways will be built both east and west of 95th Street to convey flood water from one gravel pond to another, but these will also remain dry outside of flood events.

95th Street will be raised slightly across the floodplain and designed to allow water to flow over the road during any event larger than a 10-year flood. The downstream edge is being engineered to resist erosion and will remain stable as the water flows over the road.

95th Street has not been repaved in many years and needs to be reconstructed from the ground up. Public Works repaved the segment north of Lafayette in 2016, rebuilt and widened the off-set intersections at Valmont and Isabelle roads in 2018, and reconstructed the road north of Lookout Road to Longmont in 2020. This project, currently scheduled for construction in early 2024, will reconstruct the road at its current width, including five-foot shoulders, along with some changes to the vertical grade to improve safety and reduce road noise caused by vehicles speeding up and slowing down on hills.

Based on traffic entering and exiting the neighborhoods on each side of North 95th, the project will include adding a left-turn lane for northbound traffic wanting to turn onto Gunbarrel Ridge.

Public Work has been working with the City of Boulder’s Open Space and Mountain Parks Department during the development of this project with the intention of respecting the open space value and agricultural heritage of the Boulder Valley Farms operation. The system has been designed with the needs of the open space habitat in mind. Not only will this project protect the property during large flood events, but it will also enhance the ecological value of the property by managing flood waters, improving storm drainage across the road, enhancing and increasing wetlands, and replacing some of the city’s farm infrastructure adjacent to the project area.

Boulder County is currently working on final changes to the road plans.

There are no meetings currently scheduled