Holcim-WCR, Inc., formerly known as Aggregate Industries, began reclamation of the Lyons Quarry at Hall 2 Open Space in fall 2021. Mining and reclamation occurred under a permit issued by the State of Colorado’s Division of Reclamation, Mining, and Safety (DRMS). Although the property is owned by Boulder County as open space, the quarry and its subsequent reclamation requirements are under the jurisdiction of DRMS, and Holcim-WCR, Inc. is solely responsible for the reclamation project and operations.

Holcim-WCR, Inc. has coordinated and worked with Parks & Open Space since the county purchased the property in 2011. Since that time, the county, as landowner, has provided comments and recommendations to Holcim-WCR, Inc. and DRMS, but DRMS provides the ultimate oversight and approval of the mining and reclamation permit and work.

The final reclamation plan calls for:

Andesite intrusion between layers of sandstone 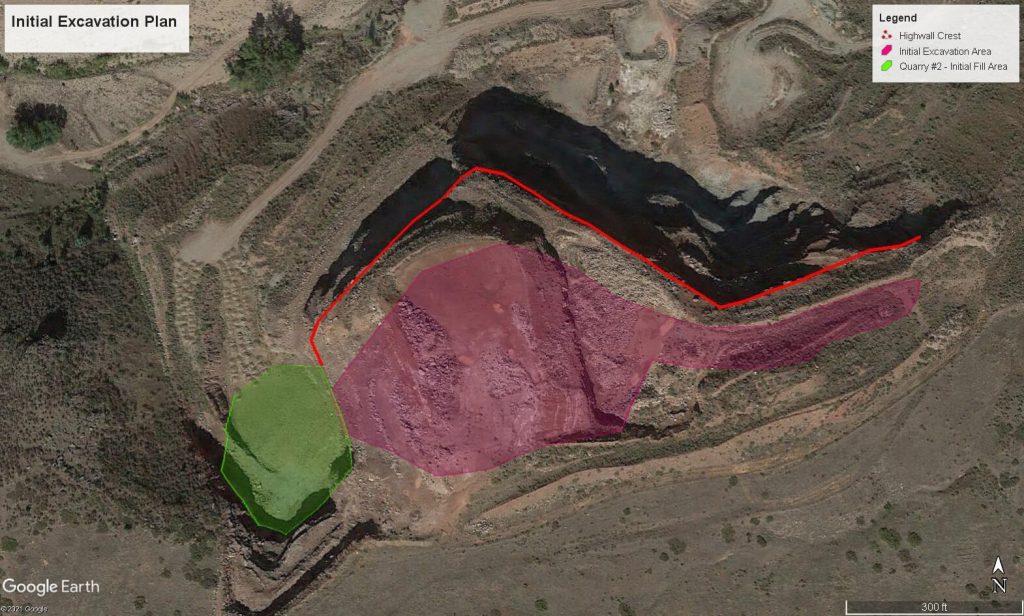 Features of the reclaimed site will include: 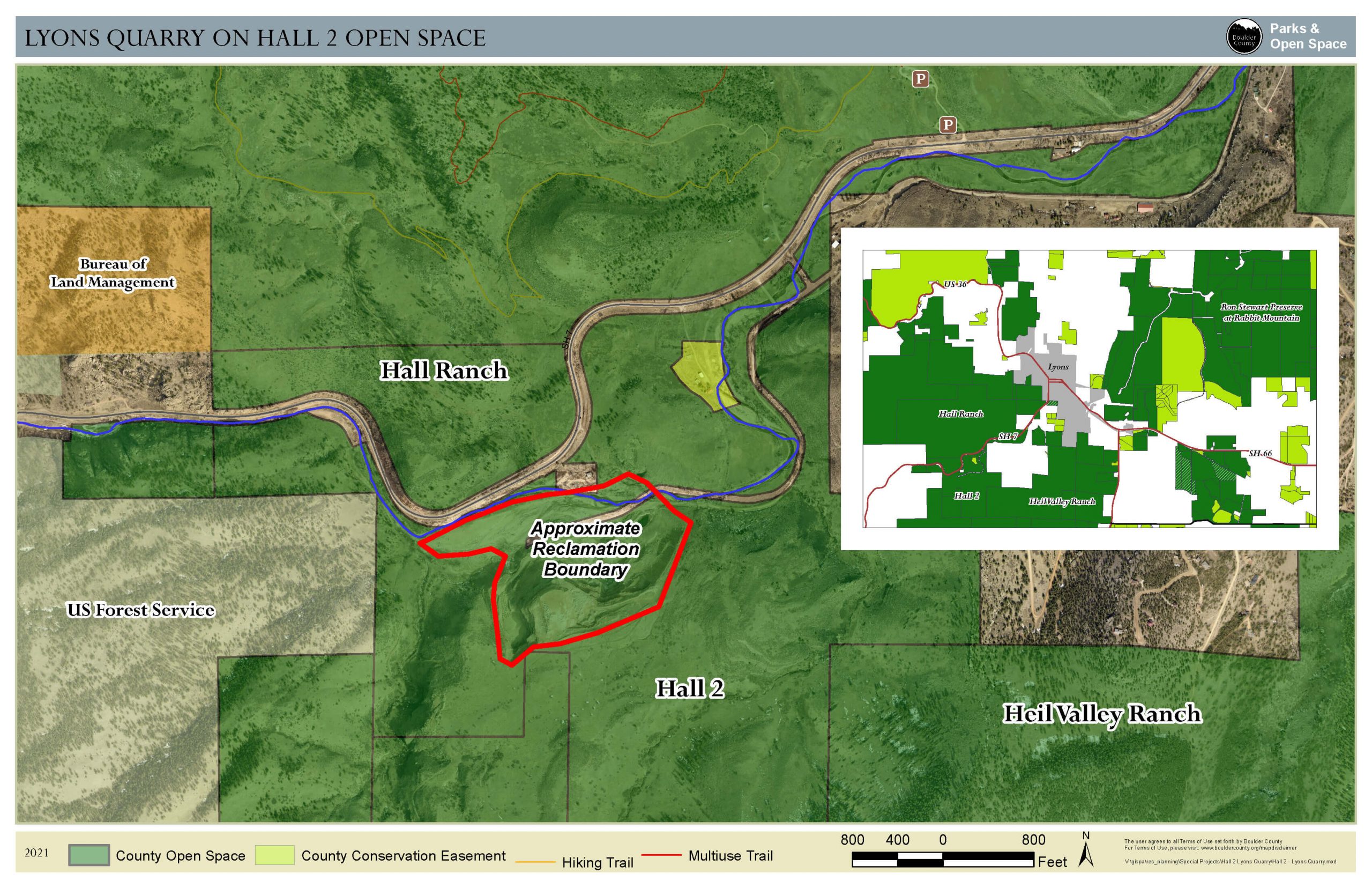 Over 50 years ago, an approximately half-mile reach of South St. Vrain was channelized along the south side of State Highway 7 on what is now the Hall 2 Open Space property. An aerial photograph from 1940 shows the natural alignment, which had more natural meanders across the floodplain. Because the channelization was not part of the mining plan for Lyons Quarry, it was not included in the mine reclamation permit and is outside the permit boundary. Therefore, the mining company is not responsible for its reclamation.

Since 2011, Parks & Open Space has envisioned realigning the creek to its natural alignment. The post-2013 flood assessment, planning, and engineering supported this vision. A 30% restoration design plan for the site was completed in 2016 as part of the 2013 flood recovery efforts. This plan shows the creek being realigned and restored into its natural meander using natural channel deign principles and the construction of overflow channels.

Parks & Open Space plans to finalize the creek restoration designs in 2023. The timing of construction is dependent on how soon the area is successfully reclaimed and released from its reclamation bond by DRMS. In addition, funding for the restoration work is still pending, but the department hopes to complete the work prior to future public access.

The project will improve resiliency by increasing the floodplain connectivity and providing areas for flood waters and sediment to spread and settle out during high flow events. It will also improve the habitat quality by providing in stream features, such as riffles and pools and large woody debris, as well as improve and increase the wetland and riparian habitat. Finally, realigning the creek will provide better access for potential future public use pending the outcomes of the management planning process. 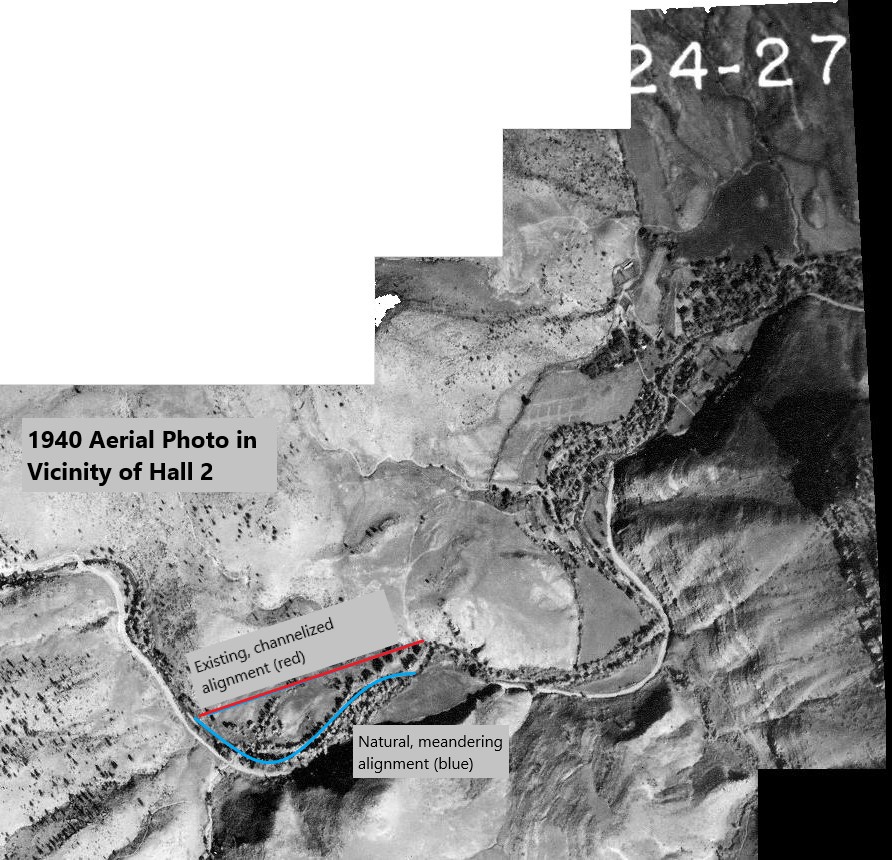 Parks & Open Space will not have full management authority of the property until Holcim-WRC, Inc. has successfully reclaimed the Lyons quarry and DRMS releases the mine’s reclamation bond. To help determine the best uses of the property, the department wants staff and the public to have a good view of what the post-reclamation landscape will look like before starting a planning process.

At that time, Parks & Open Space staff will conduct a public planning process to determine the future management direction for the Hall 2 open space property. This property is part of the larger North Foothills open space complex which includes Hall Ranch and Heil Valley Ranch. The site has the potential for many unique opportunities for recreation, appropriate public amenities, education and interpretation, and the conservation of significant natural resources.

The site has been mined by various operators since the 1950s with most of the active mining occurring between 1977 and 2008 under DRMS permit M-1977-141. Although the site was under a five-year “temporary cessation” between 2011 and 2016, whereby the mining company was allowed by DRMS to postpone all mining and reclamation activities, the company continued to revise their reclamation plan and met with Parks & Open Space staff several times to hear about the department’s interests and long-term plans for the site.

The 2013 flood did a lot of damage in the mine’s floodplain and washed out the county bridge across South St. Vrain Creek, which had previously provided access to the quarry.