Active construction was completed on December 12, 2017. The projects will require a minimum of three years post-construction monitoring, which Parks & Open Space will be responsible for.

The goal of the project is to restore and improve the channel and surrounding floodplain to protect life and property and provide a safe, natural, resilient, functioning, and ecologically rich habitat utilizing natural system principles. The project will expedite recovery from the 2013 floods and make the area more resilient in future flood events.

Specific components of the project include: 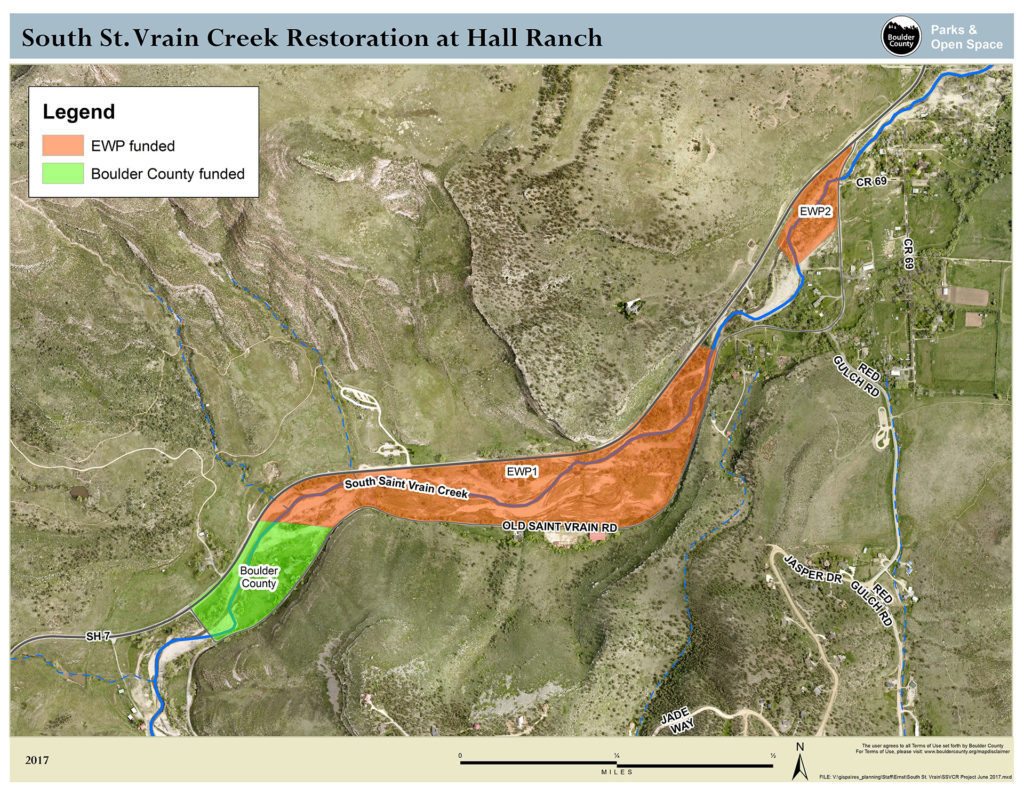 Please note this is an active construction site, and members of the public are not allowed to enter the site.

Funding for this project is from the Natural Resources Conservation Service’s Emergency Watershed Protection program, the State of Colorado through the Colorado Water Conservation Board, and Boulder County.

While it is expected that people may disagree with the necessity and merits of the ongoing flood recovery work along South St. Vrain Creek, Boulder County Parks & Open Space staff would like to clarify and correct some of the assumptions and misinformation appearing in the local papers and on social media.

While it is true that some trees were removed during the project, including a line of smaller, highly visible trees opposite the Hall Ranch trailhead, the vast majority, over 200, of the large trees and root wads that have been visible on site were hauled in from other locations. Most were trees that were salvaged along the St. Vrain immediately after the flood, and have been stockpiled north of Hwy. 66 near Lake McIntosh. Additional trees came from the Little Thompson, also salvaged after the flood, from a reservoir project near Lagerman Reservoir, and from the Town of Lyons stream work just east of the Old St. Vrain Road bridge. All dead trees were left standing where possible as we realize their role in providing wildlife habitat.

The trees cut along the Readmond farm were not part of the Boulder County project, but were cut by Poudre Valley REA as part of clearing efforts along their power lines.

No trees have been hauled to the Lyons Quarry, only sand and rock as part of our agreement with Aggregate Industries, which is also helping with the reclamation efforts that the mining company will be responsible for over the coming years. The new bridge will, in part, facilitate their access to the quarry so they don’t have to travel Old St. Vrain Road

With the exception of a few recent truckloads, all of the boulders and rock seen piled on the site were excavated from on site. The large boulders came out of old berms along the river, while the round river rock has been sorted and screened during the removal of sediment. Large areas of the meadow were filled after the 1969 flood, as is evident in the red soil and angular rock uncovered, which was hauled down from the andesite quarry.

While it is true that some areas rebounded with vegetation in the last few years, most of the areas being graded were still mostly bare sand and gravel, or were channels left over by the flood as of this year.

We have May 2017 drone flight footage that shows the extent of still bare areas. All efforts were made to save areas of vegetation, especially the large wetland area on the east end, while still meeting the design parameters allowing for increased conveyance, sediment capture, and infrastructure protection. Starting in October we will be planting over 4,000 trees and shrubs, over 9,000 willows, and 7,600 perennial wetland plants, as well as seeding with native seed mixes and mulching the entire area. With a lowered floodplain, plants will be that much closer to groundwater, and we expect areas that were high and dry will now be able to sustain a more vigorous and expanded riparian area.

The project has followed all federal and state guidelines for protection of breeding birds and raptors. August is typically the end of breeding bird season, and the contractor and county ensured that surveys were done weekly through the end of the month for breeding birds, as part of the federally mandated Migratory Bird Treaty Act. A few nests were found—swallow, warbler, and lazuli bunting—flagged, fenced off, and avoided until the birds fledged. 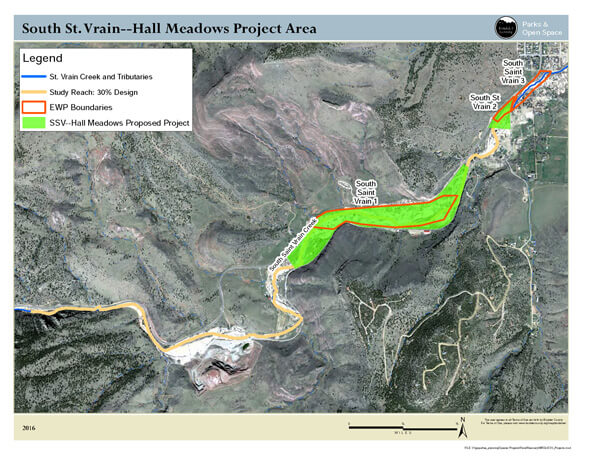 Two sections of the 3.2 mile study reach (referred to as SSV 1 and SSV 2) were identified for funding through the Natural Resources Conservation Service’s Emergency Watershed Protection (EWP) program in late 2015. The EWP program provides financial assistance for implementation of approved creek restoration plans. The county has worked with the EWP team to ensure the project meets EWP objectives and has worked to secure the necessary EWP funding for this project. In addition, Boulder County will utilize additional county funds to extend the project upstream of SSV 1 to the Andesite Bridge, which was necessary to tie the creek into SSV 1 per the 30% design plan.

The project team presented a brief update at the St. Vrain Creek Coalition meeting. The update included information about the completion of the 30% design phase for the entire 3.2 mile reach, our next steps in the final design process for EWP-eligible sites, and our anticipated construction schedule for the EWP-eligible sites.

The project team presented an overview of the Final 30% Design and Basis of Design report for post-flood restoration to the Parks & Open Space Advisory Committee on September 22.

The project team conducted a site visit with the St. Vrain Creek Coalition and interested members of the public. They discussed the preferred alternative for post-flood restoration of South St. Vrain Creek immediately upstream of the Andesite Mine down to the eastern Old South St. Vrain Road Bridge. The purpose of the site visit was to walk key segments of the planning area, review the preferred alternative, discuss how it was developed, and answer questions.

A public meeting was held on June 30 to review alternatives for the restoration of South St. Vrain Creek and to provide a summary of the engineering and other analysis that was used to develop alternatives. Consultants addressed concerns, provided responses, and made appropriate changes as necessary. In addition, the project team gave an update to the St. Vrain Creek Coalition on June 29.

Parks & Open Space and its consultant, Matrix Design Group, held the first of several public meetings on May 24 in Lyons. The purpose of the first meeting was to provide a general outline of the engineering and restoration design process and to review and discuss project goals and objectives.

The project team facilitated a discussion with attendees about the goals and other issues and concerns about the project. Notes from the meeting will be posted soon. An update to the St. Vrain Creek Coalition occurred on Wednesday, May 25, at their regularly scheduled meeting.

A short presentation was given to stakeholders that included an overview of the planning area, including existing county open space management plans, completed and on-going projects throughout the corridor, assessments and recommendations from the St. Vrain Creek Watershed Master Plan, cost estimates and funding, and some design considerations.