Repairs have been completed to Lake 4, West Lake, and the A-Frame Pond. The project included repair to the breached embankments and construction of new emergency spillways that will better protect the area in future flood events.

The flood recovery project to repair Lake 4, West Lake and A-Frame Pond began in September 2019 and was completed in August. The ponds will slowly refill with groundwater. Crews will revisit the site in fall to complete final seeding.

The Lake 4, West Lake, and A-Frame Lake Dam Rehabilitation Project is a Boulder County Parks & Open Space sponsored post September 2013 Flood Recovery Project. Lake 4 is owned jointly by Boulder County and the St. Vrain and Left Hand Water Conservancy District. The project includes the repair of four breached earthen embankments and three lakes/reservoirs on Boulder County’s Western Mobile, Braly, and Ramey open space properties. The project is located in unincorporated Boulder County between the Town of Lyons and City of Longmont. It is situated south of the St. Vrain Creek and west of N. 61st/63rd Streets just west of the Hygiene town-site.

The purpose of the project is to restore water storage and delivery function of Lake 4 and the pre-flood configuration of the other reservoirs. In addition, the project will improve the resilience of the reservoirs and the surrounding landscape by providing a more defined and controlled flood path. More than 220,000 cubic yards of sediment will be removed from Lake 4 and repurposed as fill over the course of the project. This effort lies within a broader flood recovery effort along St. Vrain Creek that aims to rehabilitate infrastructure while also restoring and enhancing natural resource values and ecosystem function in riparian and connected upland areas. 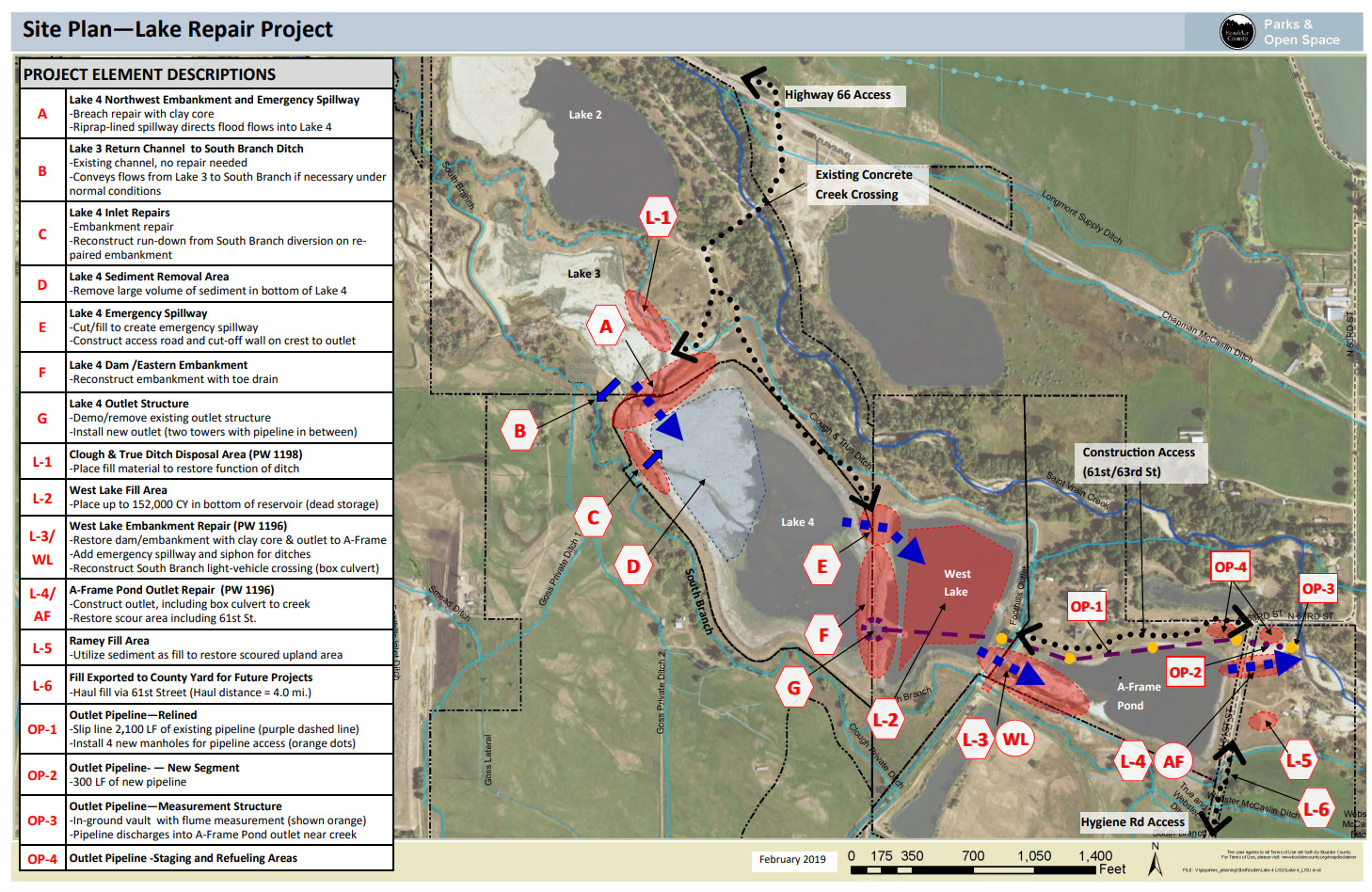 The project consists of the restoration of the four separate breaches in the reservoir embankments along with the installation of outlet structures and emergency spillways for each reservoir. The project will repair both the upstream embankment of Lake 4 shared with Lake 3, and the downstream dam embankment of Lake 4 shared with West Lake. The embankment between West Lake and A-Frame Lake will be repaired and include the installation of two inverted siphons to route historical ditches across embankment. Additionally, a concrete overflow weir and box culvert spillway structure from A-Frame Lake to St. Vrain Creek will be constructed. The existing outlet pipeline that delivers water stored in Lake 4 to St. Vrain Creek will be rehabilitated and new discharge structure constructed.

The construction contract has been awarded to Kirkland Construction. Construction began in September 2019 and is expected to be completed in the fall of 2020.

This is a large civil construction project that will involve heavy construction equipment, such as large-scale dozers, excavators and off-road haul trucks. In addition, 10 to 20 loads of construction materials (sand, gravel, and riprap) are expected to be imported each day by way of Highway 66 and Hygiene Road.

Heavy rains over several days in mid-September 2013 resulted in extensive flooding and debris flows along St. Vrain Creek and its tributaries. The severe damage in the project area was due to the volume and velocity of water and the amount of sediment from a spatially varied split flow in St. Vrain Creek, upstream of the project area. The system of inter-related ponds at the properties was significantly impacted by the split flow. The upstream breach of the creek that led to the split flow was stabilized in a previously completed flood recovery project. During future high flow events this creek breach repair will overtop resulting in a split flow. The project is designed to safely convey future flood flows back to the creek.

The construction cost is approximately $9.2 million. The project is supported by grant funding from the Federal Emergency Management Agency (FEMA) Public Assistance Program; grant funding from the Housing and Urban Development (HUD) Community Development Block Grant – Disaster Recovery (CDBG-DR) program as administered by the Boulder County Collaborative; and a loan to the District from the Colorado Water Conservation Board (CWCB).

The Lake 4 upstream embankment repair will be constructed as a zoned embankment with a clay core (Map Element “A”). The repair includes an emergency spillway that will safely pass design flood flows from Lake 3 into Lake 4. As a result of this repair, Lake 3 will fill with ground water again.

Down-gradient, the breached Lake 4 Dam Embankment, located between Lake 4 and West Lake, will also be repaired (Map Element “F”). In order to repair the embankment and key-in the required clay core, the existing outlet structure for Lake 4 must be removed. The outlet will be replaced with a two-tower outlet structure (Map Element “G”). The Lake 4 Outlet Pipeline (Map Element “OP-1”) will connect to the outlet structure. Rehabilitation of the Outlet Pipeline is described in more detail below. On the north end of the embankment, an emergency spillway with a riprap rundown will be constructed that will discharge directly into West Lake (Map Element “E”). A crest control concrete cutoff wall will be constructed to protect against surface erosion during spillway overtopping. The project also includes the excavation of more than 220,000 cubic yards of sediment deposited within Lake 4 during the flood event (Map Element “D”). The sediment will be used as fill material in various locations within or near the project area (Map Elements “L-1” thru “L-6”). One area is on the northeastern edge of Lake 3 where safe slope will be established and subgrade construction will be done in preparation to restore the Clough & True Ditch in the uplands immediately outside of the reservoir (Map Element “L-1”).

West Lake: The downstream embankment of West Lake was also breached during the 2013 flood. It is a jurisdictional reservoir managed for ecologic and passive recreational purposes by Boulder County. It lies within the St. Vrain Creek geomorphic floodplain and is just east of Lake 4. The breach occurred where it is separated from the down-gradient A-frame reservoir by a temporary berm of alluvial gravels constructed by the Highland Ditch Company immediately after the 2013 flood to restore the function of the Foothills Outlet Ditch. The full breach at West Lake will be repaired as a zoned embankment with a clay core, including installation of a 70 foot wide over-the-embankment spillway at the breach location (Map Element “WL”). The spillway will be constructed using soil rip-rap. A crest control concrete cutoff wall will be constructed for protection against surface erosion during spillway overtopping.

About half of the sediment being removed from Lake 4 will be placed in the bottom of West Lake (Map Element “L-2”). Disposal in this location is very cost effective and will not affect the function of the reservoir. It may also result in some overall positive habitat affects by diversifying the types of aquatic habitats present on the complex of open space properties.

The Foothills Outlet Ditch and Clough and True Ditch have historically run across the top of the West Lake Embankment (Map Element “WL”). To restore functionality to these two ditches and allow for installation of the soil rip-rap emergency spillway, two inverted siphons encased with imported fill will be installed across the new embankment. A concrete box culvert crossing will be installed in the pre-flood crossing location adjacent to the Foothills Outlet on the South Branch to allow for crossing of the South Branch for maintenance purposes.

A-Frame Lake: A-Frame Lake was breached during the 2013 flood. It is a non-jurisdictional reservoir managed for ecologic and passive recreational purposes by Boulder County. It lies within the St. Vrain Creek geomorphic floodplain and is just east of West Lake. N. 61st Street forms the east A-frame Lake embankment and was reconstructed immediately after the 2013 flood with local alluvial material and imported gravel road base. A-frame Lake is a reclaimed gravel pit that was filled by groundwater after mining was complete. The berms that separate the West Lake and A-Frame Lake reservoirs help maintain the down-gradient natural drop to St. Vrain Creek. A two tier concrete overflow weir spillway structure combined with a 10 foot reinforced box culvert will be constructed to pass 100 year flow underneath 61st street and out to St. Vrain Creek (Map Element “AF”). A 30 foot wide Turf Reinforcement Mat (TRM) will be installed on the east bank of 61st Street. A 14 inch full depth of Aggregate Base Course (ABC) will be placed and compacted where 61st Street is regraded, to allow recommended overtopping.

Lake 4 Outlet Pipeline: There is an existing 18-inch reinforced concrete pipe (RCP) from the Lake 4 east embankment that discharges at St. Vrain Creek just upstream of the 61st Street Bridge. This pipe has developed leaks and will need to be restored for efficient release from Lake 4 to St. Vrain Creek. From the outlet structure at Lake 4 the existing pipeline runs under the West Lake floor and along the north side of A-Frame reservoir prior to discharging into St. Vrain Creek (Map Element “OP-1”). Four new service manholes will be installed along the existing pipeline. The existing pipeline will be slip lined with a 14 inch HDPE pipe between each manhole. The existing 18 inch RCP from the last access manhole will be abandoned. This segment will be replaced with an 18 inch HDPE pipe located on a new alignment between the easternmost manhole (Map Element “OP-2”) and a new measurement structure (Map Element “OP-3”). From there, the measured flows will spill into the planned A-Frame Reservoir five by ten foot box culvert.