Throughout the summer the corn plots were irrigated regularly by the lateral sprinkler and had a good growing season. In August, the Ag Resources Division completed a soil health assessment with volunteers.

On Sept. 26, custom cutters harvested the corn as forage for a local dairy. The entire corn plant was cut off about eight inches above the ground, chopped up into small pieces, and shot into a trailer where it was hauled to the DeHaan Dairy to be fermented into ensilage for the dairy cows’ daily feed rations. 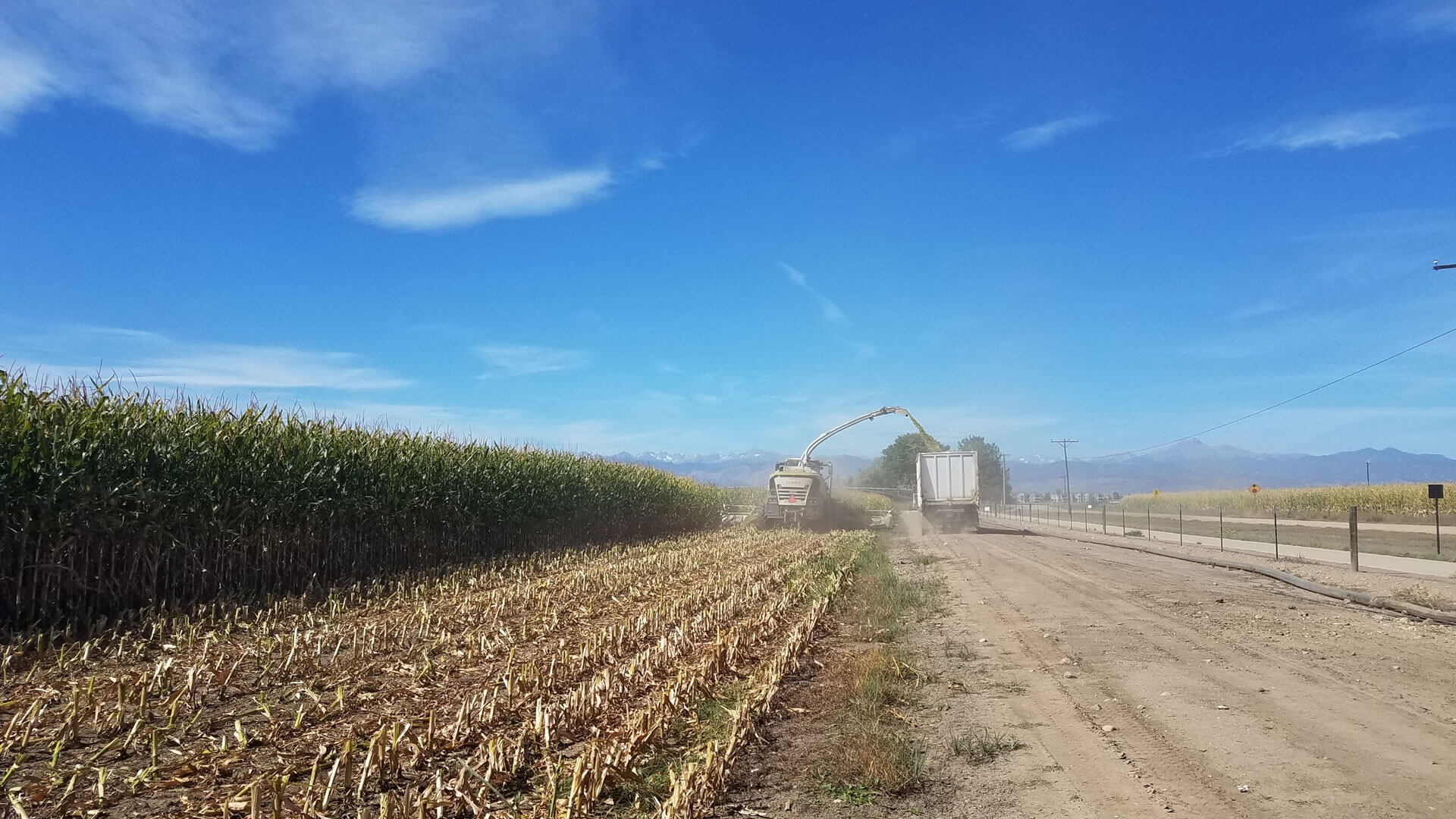 Staff also collected ears of corn, raw silage, and soil samples from the carbon sequestration treatments for lab analysis. The lab results help CSU, staff and farmers to make plans for future compost additions and to see if there were differences in the treatments within the first year.

After harvest, the field was tilled to prepare for the next crop. In early October, farmers Paul and Scott Schlagel planted triticale on the entire property. The triticale will be harvested for seed next year (late July) and will also act as a cover crop for the soil over the winter.

On May 13, Farmers Paul and Scott Schlagel planted corn under the lateral sprinkler on the Campbell and Quicksilver Properties.

The cover crop of rye and hairy vetch grew well this spring, and after two and a half months of growth, the cover crops were sprayed with an herbicide just prior to emergence of the corn seedlings. 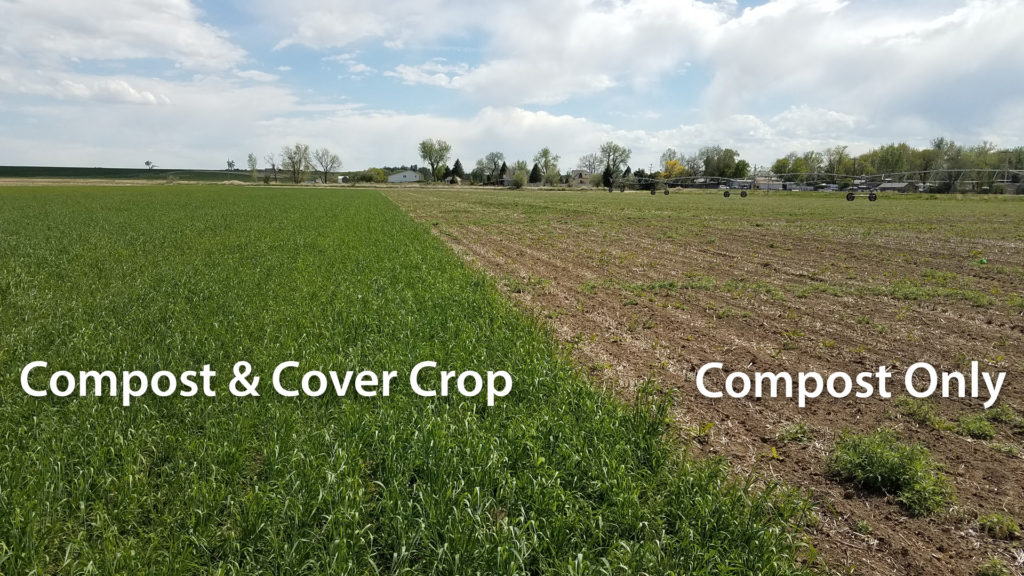 The Campbell and Quicksilver property is the cropland site for the county’s pilot carbon sequestration project. Five proven carbon-sequestering techniques identified in the study with Colorado State University include:

Farmers Paul and Scott Schlagel already incorporate tillage reduction and use of slow release fertilizers/nitrification inhibitors. This project allowed the county and the farmers to share in the cost of two additional techniques: utilizing compost amendment and cover crops.

On February 27, the farmers hauled and spread EcoGro Compost (Class 1) from A-1 Organics in Keenesburg, Colorado. The compost was applied at 16 tons/acre to two 5-acre subsections of the property. The compost covered the ground at about 3/8” deep.

On March 1, the tenants drilled a cover crop of two species, rye and hairy vetch, into two 5-acre subsections of the property. By splitting the cover crop seed over the compost and adjacent control plots, there are two replicates of 2½-acre blocks with and without compost and cover crop.

This process will show the effects of compost and cover crops on the performance of the 2019 corn crop and the subsequent crops.

The Campbell and Quicksilver Farm Properties are located in Longmont along Quicksilver Rd between N 119th St and E County Line Rd.

The farm is a one mile long stretch of open space made up of two different properties. Boulder County purchased the Quicksilver Farm Property (the eastern three-fourths) in 1995. The Campbell Property (the western fourth) was purchased in 2000. These two properties have been leased to Paul Schlagel and Scott Schlagel since 2006.

A harvester cut down the sorghum and laid it into rows during the last week of September. The yield varied across the field due to the August hailstorm. The farmers are now waiting for the sorghum to dry to the purchasing dairy’s specifications. As large as the windrows are and the pending wetter weather, this may take some time. This field is also one site of Boulder County’s carbon sequestration project. Carbon sequestering techniques such as the application of compost and planting cover crops will likely occur here this fall.

As of noon on August 14, a good stand of forage sorghum stood two feet tall. Unfortunately, another hailstorm on that same evening shredded much of the crop on the eastern ¾ of the field.

On June 19, a devastating hailstorm ripped through the center of the county and destroyed thousands of acres of crops. The barley, just a few short weeks from harvest, suffered yield loss up to 90%.

At that point, there was no possible way the barley could be used as malt for MillerCoors Brewing Company. The farmers salvaged what they could by cutting and baling the remaining straw. Shortly after, the farmers made the decision to plant forage sorghum. The sorghum will be sold to a local dairy. 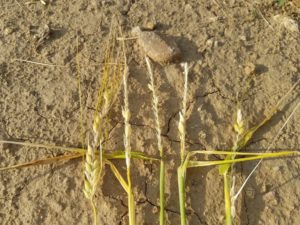 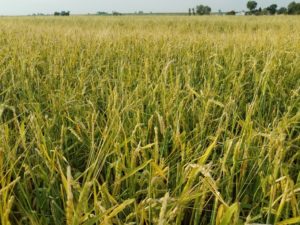 In Boulder County, irrigation season for crops typically begins in May. Last month, watering began on this barley crop. The overhead lateral sprinkler makes it much easier to apply the right amount of water to the crop at the right time. This is a new sprinkler, so this is the first crop it has irrigated.

The sprinkler is a very sophisticated piece of equipment. If you notice, it is not connected to anything except the water hose and a cord to power the tires. It is guided through the field by GPS. The farmer is able to create numerous programs to vary the amount of water applied across a field, control the sprinkler and get updates via his smartphone.

There is a bit more work involved with a lateral move sprinkler than a center pivot sprinkler. The configuration of the sprinkler and the size of this field allow the sprinkler to cover one-quarter of the field in one day, then the farmer unhooks the hose and connects it to the next valve. There are four valves for this field, so the total irrigation time for the whole field is four days.

This area experienced a very dry late May and the hot, dry weather continues into June. A barley crop usually requires about 12 inches of water during a full season, which is typically April through June. With the warm and dry weather, this crop required 2.3 inches just last week.

One possible downside of a sprinkler is that the barley could fall down from the extra weight of the water being sprayed over the top of it. This might happen in the next 30 days. As the crop matures and the grain heads get heavier, the stalk cannot support the weight of a mature seed head with the force from the water spray. The farmers will watch carefully to stop sprinkling before that happens. They will continue to water until they see signs the barley crop is mature. Then, they hope there is enough moisture in the soil to finish the crop without further irrigation.

Like any large piece of equipment, sprinklers do have issues. After many safety shutdowns already this season, they finally discovered there was a faulty GPS antenna. After replacing the antenna, the problems have been minimal. 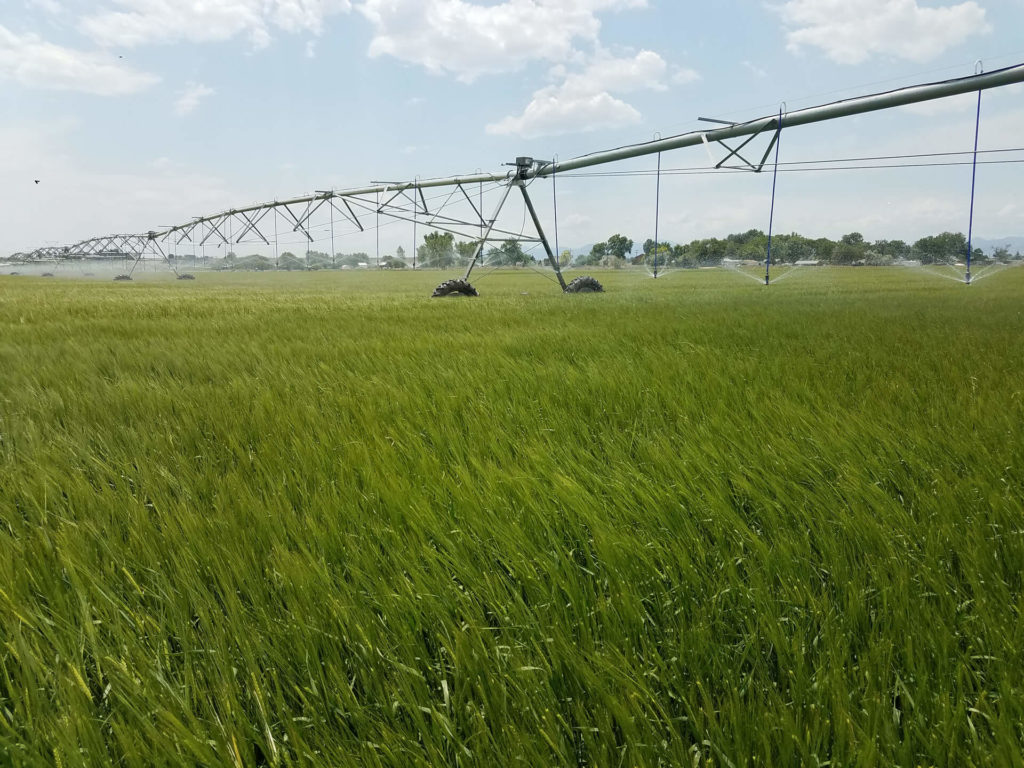 This past month, the farmers have spent the majority of their time and resources planting other crops on fields and other farms. With minimal moisture, the malt barley germinated and is progressing a little slower than normal. It has been very dry this spring and the barley is reflecting that.

According to soil test results, 110 pounds of nitrogen fertilizer was applied with a stabilizer that restricts volatilization. Along with the nitrogen, 20 pounds of phosphorus and ten pounds of potash were also applied.

A new irrigation system was installed in 2017. It was used for the first time last year. The system has increased the efficiency of irrigation on this field. The water used to irrigate this farm comes through the Bonus Ditch. The water is diverted from Left Hand Creek into the Bonus Ditch from a diversion structure located just east of Martin Street and Ken Pratt Boulevard. Normally, water is diverted into most irrigation ditches around May 1 which restricts the ability to water the barley crop until after that date.

The farmers are scouting the barley fields to determine the extent of wind damage, looking for weeds and other pests. To date, they have not found any weeds or pests that require attention. They attribute this to the technology they have adopted over the past several years. 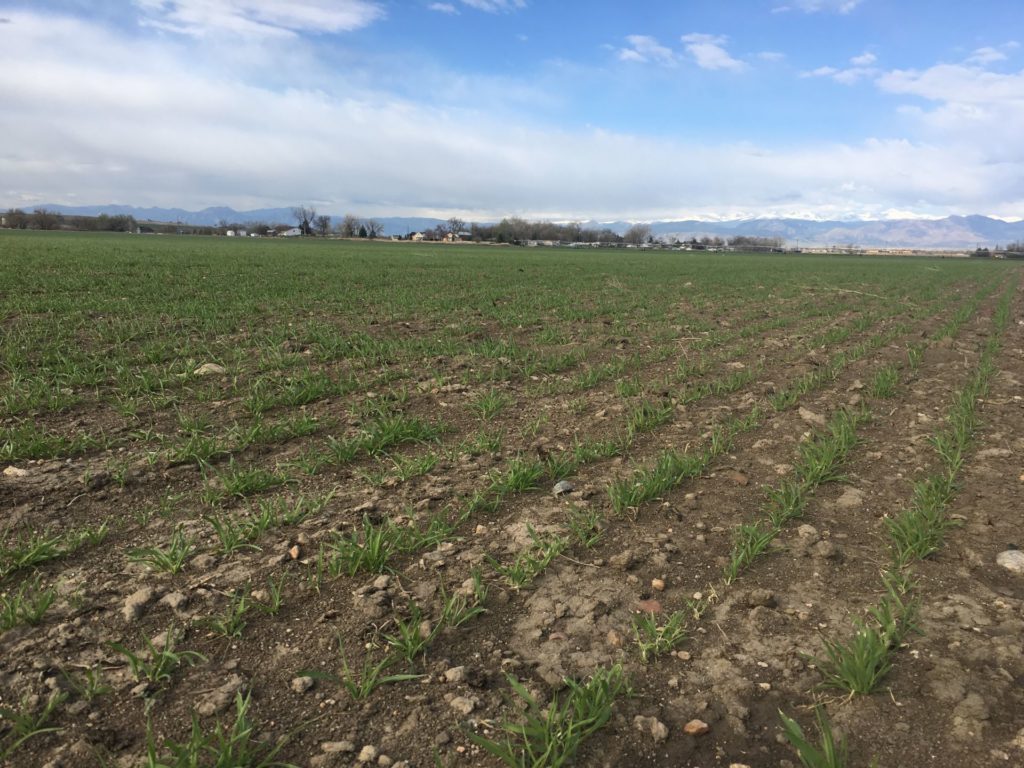 Malt barley was planted on March 9 and 10. Last year sugar beets were grown in the field. Sugar beets leave very little residue on the surface after harvest. When there is little residue, farmers usually plant a cover crop to protect the soil from wind erosion. But since the barley crop was planted early in the year, it will act as a cover crop and will minimize wind erosion.

This barley is planted with the intention of selling the harvested crop to MillerCoors Brewing Company. MillerCoors is very meticulous in their process to procure barley to malt in Golden, Colorado. MillerCoors provides the seed which is a Moravian hybrid. The Moravian barley seed was brought to Colorado from what is now the Czech Republic in 1936. The seed has evolved over the years but can still be linked to that original variety.

There are also seven test strips of experimental barley varieties planted in this field. These test strips are half-acre plots that will be harvested individually to analyze each variety and track and compare the results. The test varieties will not be sold to MillerCoors. 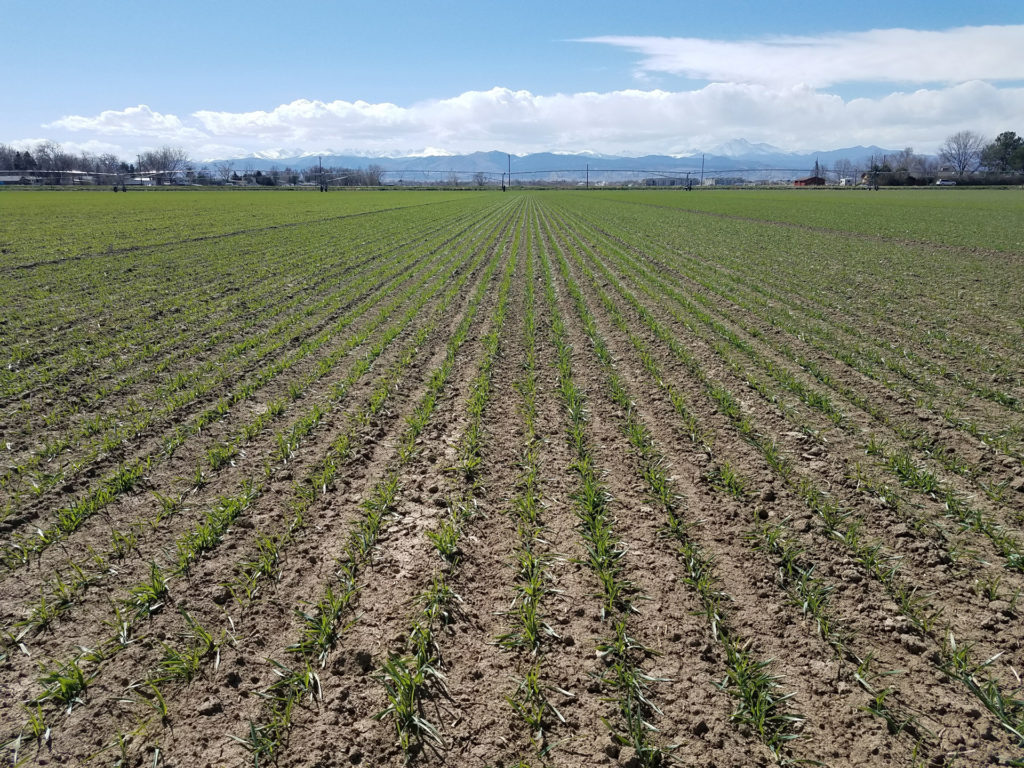