News Archive
Boulder County / News / Water rescue of dog
ATTENTION: This news article is more than 1 year old and information may be outdated.

At approximately 1:30 p.m. Boulder County Dispatch received a call reference a "dog in the water" in the South Fork of Boulder Creek, which is located to the west of the Hessie trailhead and Fourth of July Road, which is west of the Town of Nederland. According to the owner, the dog, a 7- year-old female yellow lab named Sage was running off leash on the trail and then went out of view from their vantage point on the trail. A minute or two later, Sage was observed in the creek being swept downstream. Sage managed to get onto a rock in the middle of the creek and was stranded there until rescuers arrived.

Members of the Nederland Fire Protection District, Boulder Emergency Squad (BES) swift water team, Boulder County Sheriff’s Office deputies and American Medical Response (AMR, on standby) responded to the location. A technical rescue was performed where BES rescuer Cliff Rosell forded the creek while on a safety line to reach Sage. Cliff then carried Sage to the south side of the creek. A high line was set up by BES from the south side of the creek to the north side to get Sage and Cliff back to the owner and rescuers. Sage was wet but not injured. This was the best outcome possible for Sage and her owner.

This is a good reminder that currently, our region of Colorado has a snow pack of over 300% above average for this date and water levels and water volume will continue to be above normal for the foreseeable future. Please take care when recreating in person, with friends, or with your furry friends around fast moving creeks, streams and rivers.

The associated case number for this incident is 17-3274. 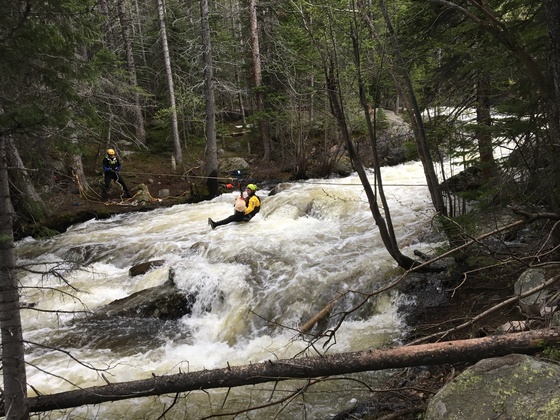