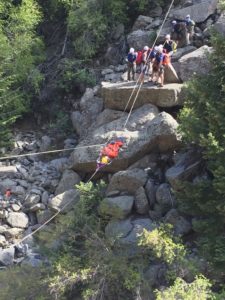 The climber, a 30 year old Boulder County resident, was climbing the tower with friends when he fell approximately 50 feet. His fall was broken by a tree, however, he sustained a non-life threatening injury to his right shoulder. The 30 year old male had several years experience climbing, was wearing a helmet and using proper safety equipment at the time of the accident.

When rescuers reached the patient, he was in pain, but alert and able to answer questions. The patient was treated and prepared to be moved off the mountain.

Members with RMR used ropes to effect a technical rescue, extracting the patient from a steep slope and across the Boulder Creek. He was transferred to an AMR ambulance and taken to an area hospital to be treated for his injuries.

The Boulder County Sheriff's Office case report number for this incident is #17-3055.